Here we are on the backside of summer, it has been long and hot. Maybe your washer has gotten a good workout this summer. It’s once again time to check those washer hoses to make sure there is no sign of bulges or slow leaks. Now is also a good time to deep clean your floors! If you’ve spent a lot of time outside, that means more chances for dirt and dust to come inside. Dust mites are a common allergen for people, so vacuuming with a HEPA filter, or getting carpets steam cleaned can help alleviate symptoms. Continue the floor cleaning to the outside, you could also deep clean your driveway and other concrete and stone areas around your home. While you’re outside, it’s a good time to inspect your roof, so any repairs can be made before it’s too cold to get them done. If you see broken shingles, damaged roof flashing, or rust, you might want to have these addressed. While you’re outside, check your yard for any indication that wasps are living there. They become more prevalent in late summer and are more likely to sting this time of year.

Continually inspect caulk and other seals around your home. This can be on doors, windows, patios, and around chimneys.

This remodel project started with a desire to improve the master bathroom and closet and finish the entertaining space in the basement.

The master bath had a large corner tub, and the shower and toilet were in a separate room, as was the closet. The basement was your average, unfinished basement with good ceiling height. 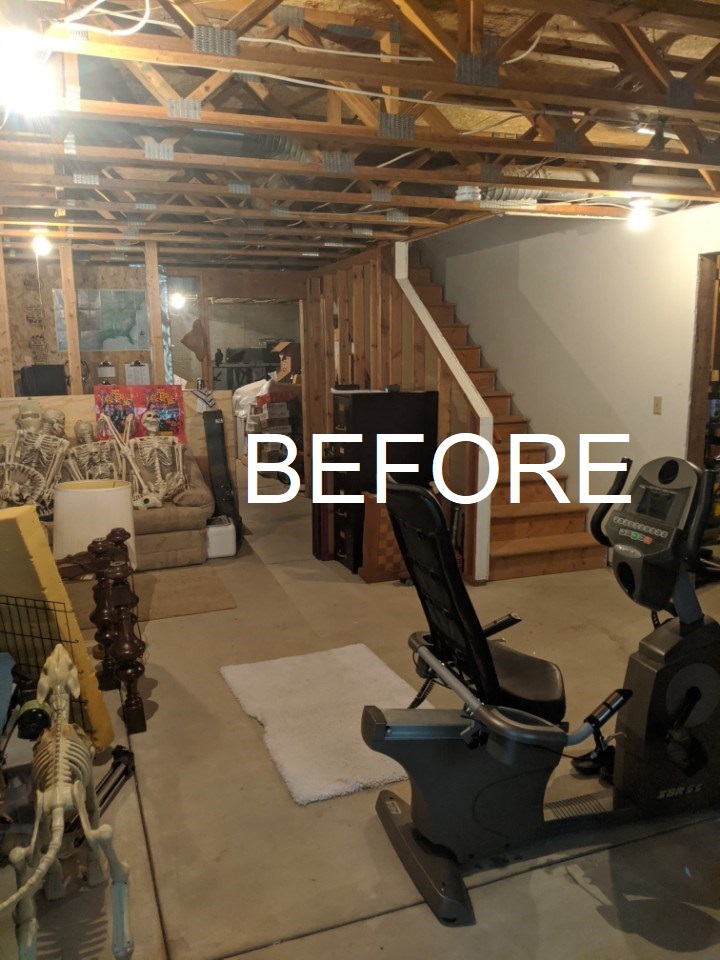 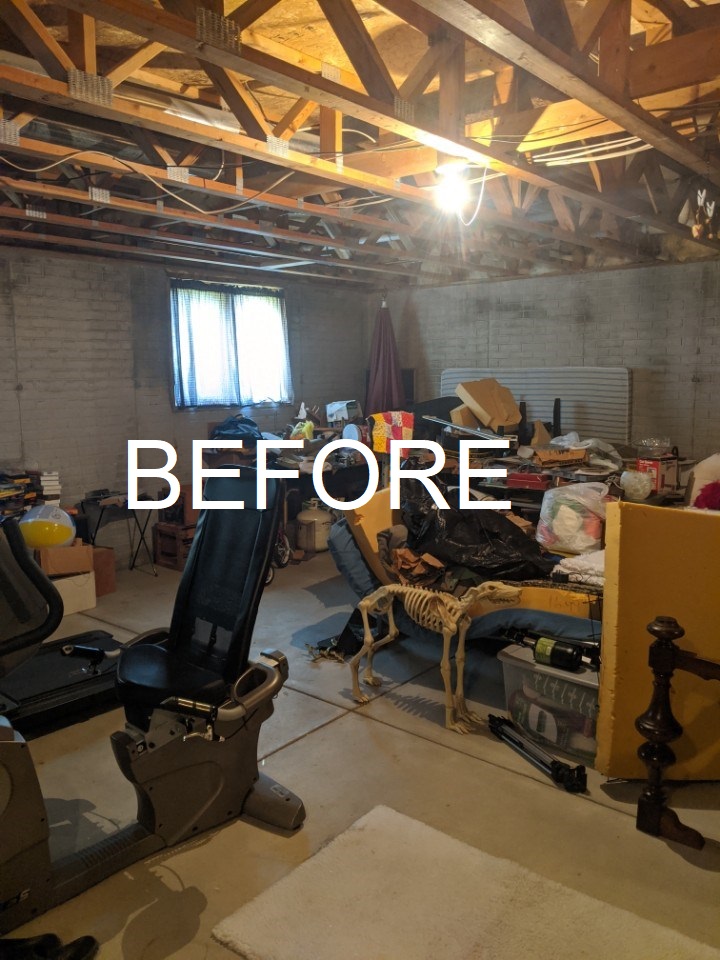 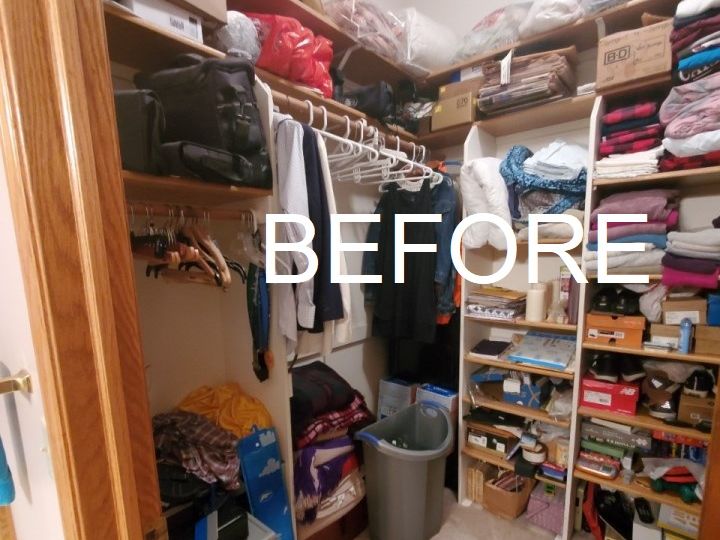 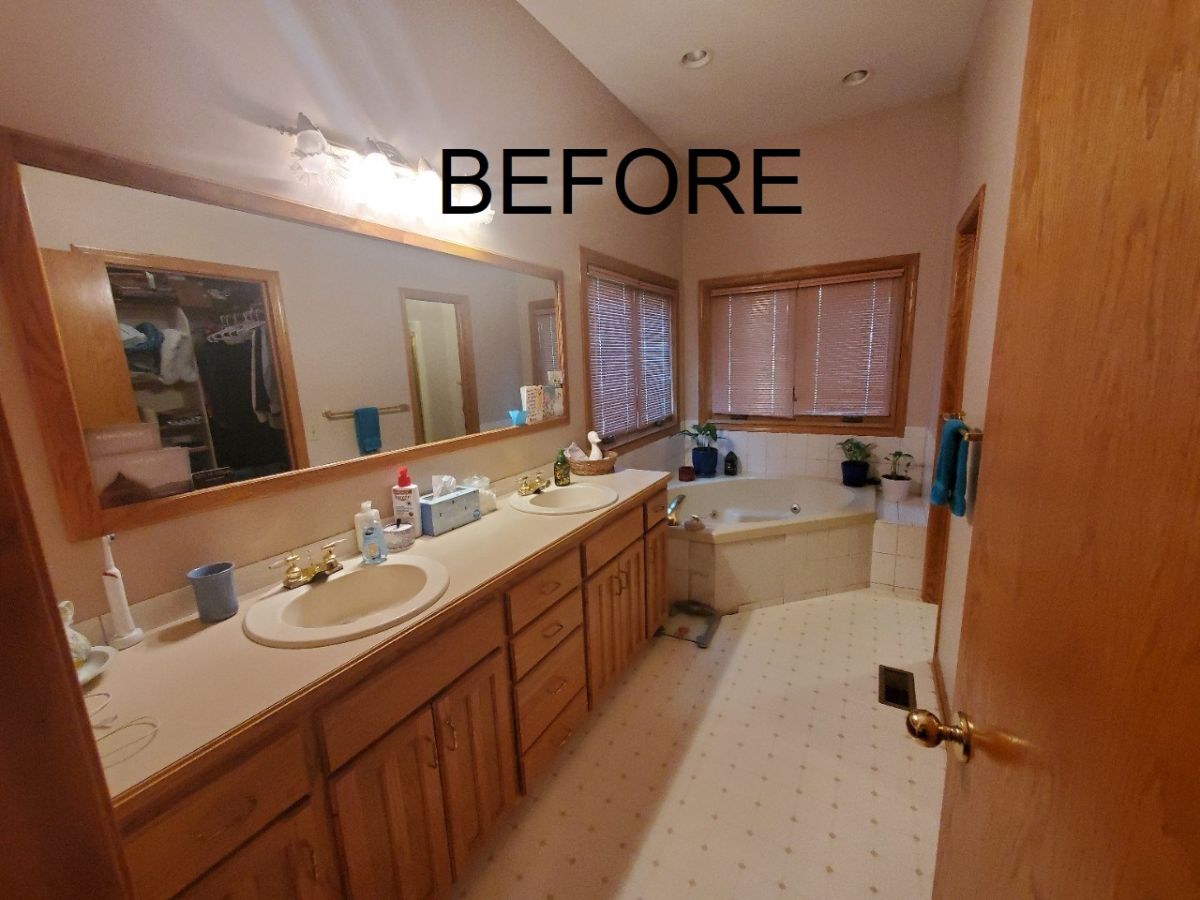 In the bathroom, the wall to the toilet/shower closet was removed and the space became a large, walk-in shower, with a nice long bench area and water controls near the entrance. 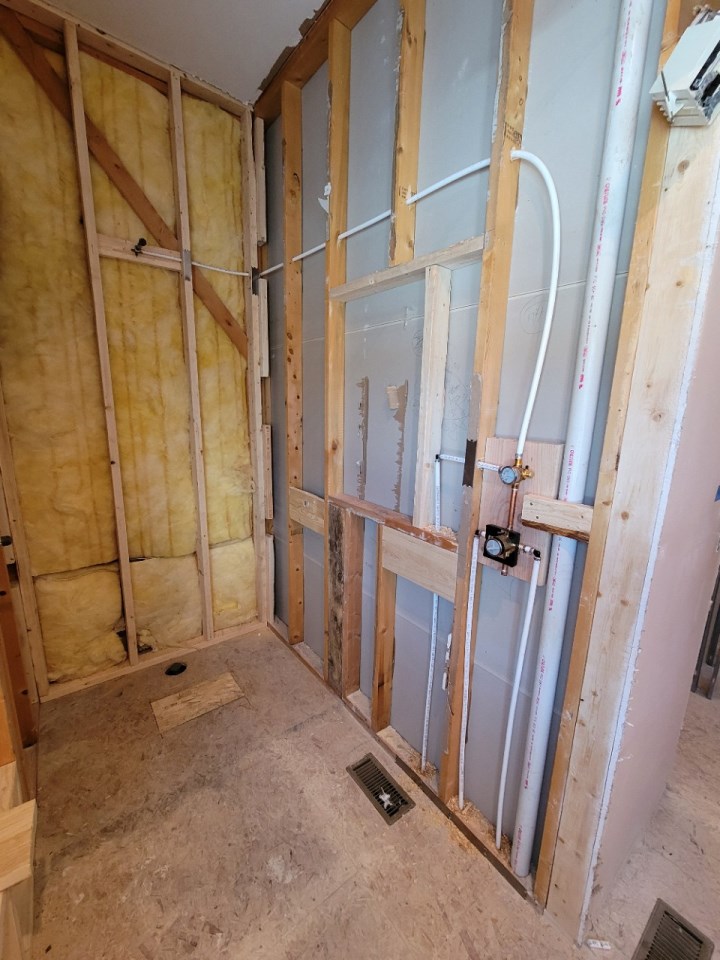 The large corner tub was removed, along with the windows beside it, and a new toilet closet was framed into the space. 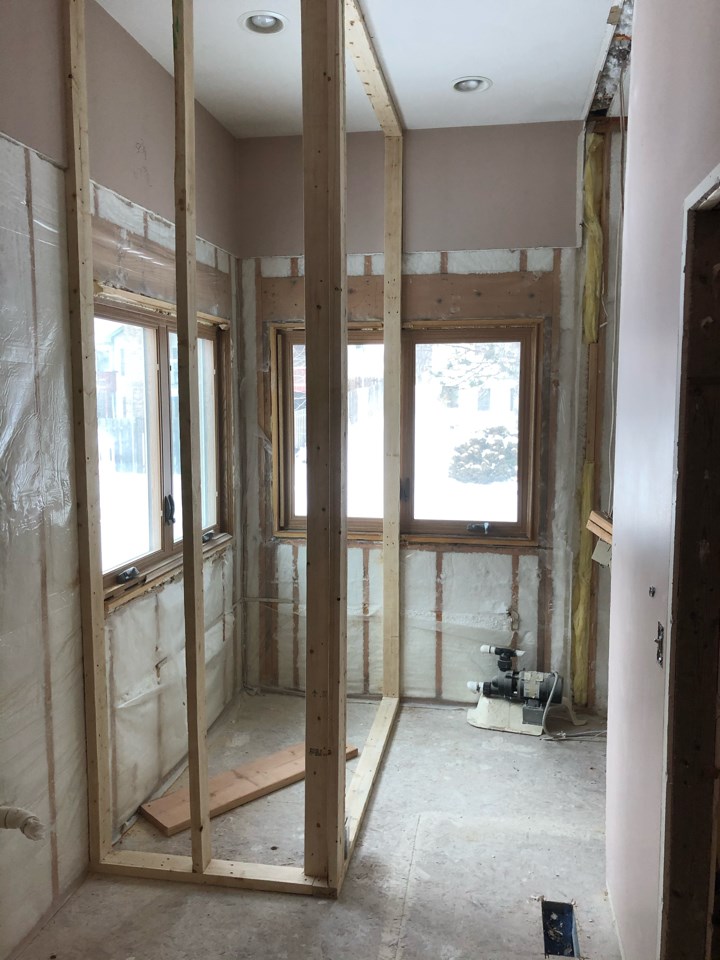 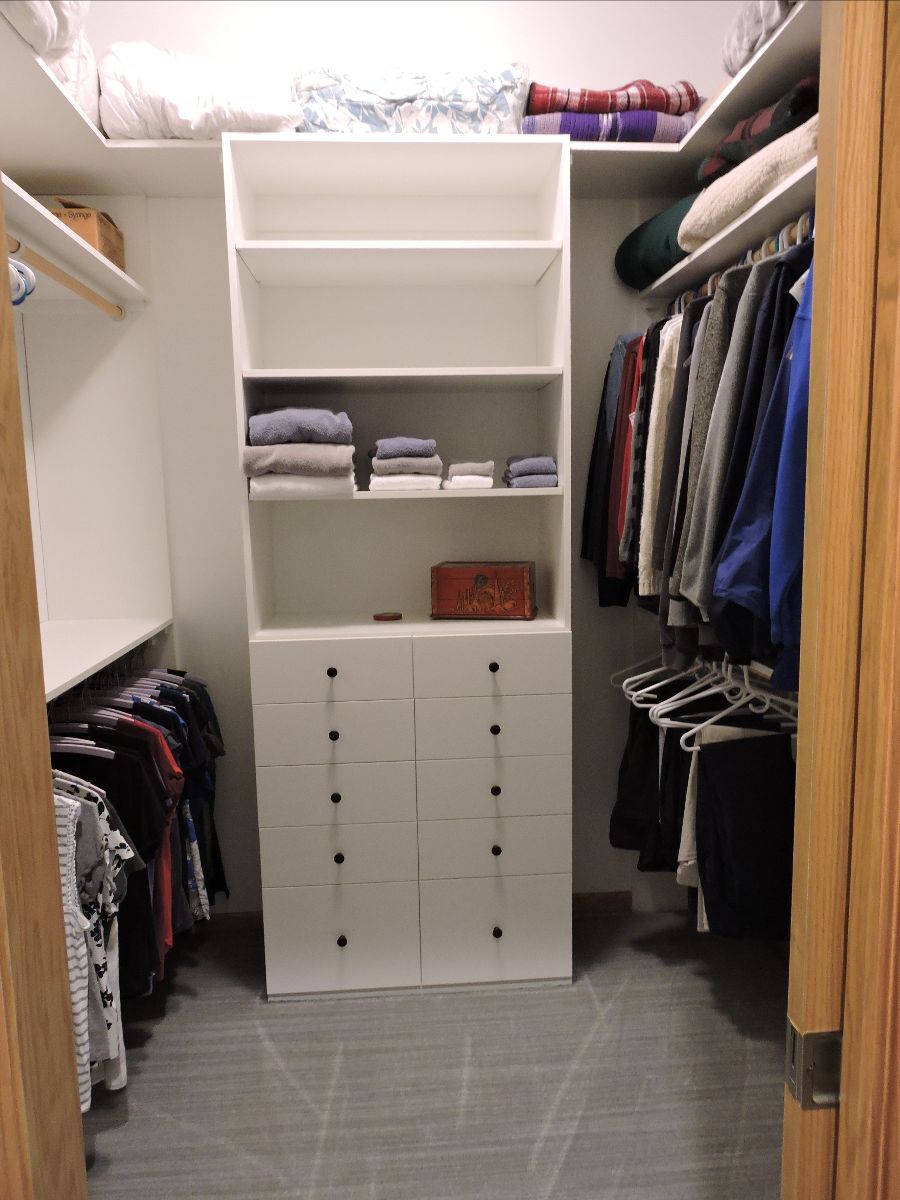 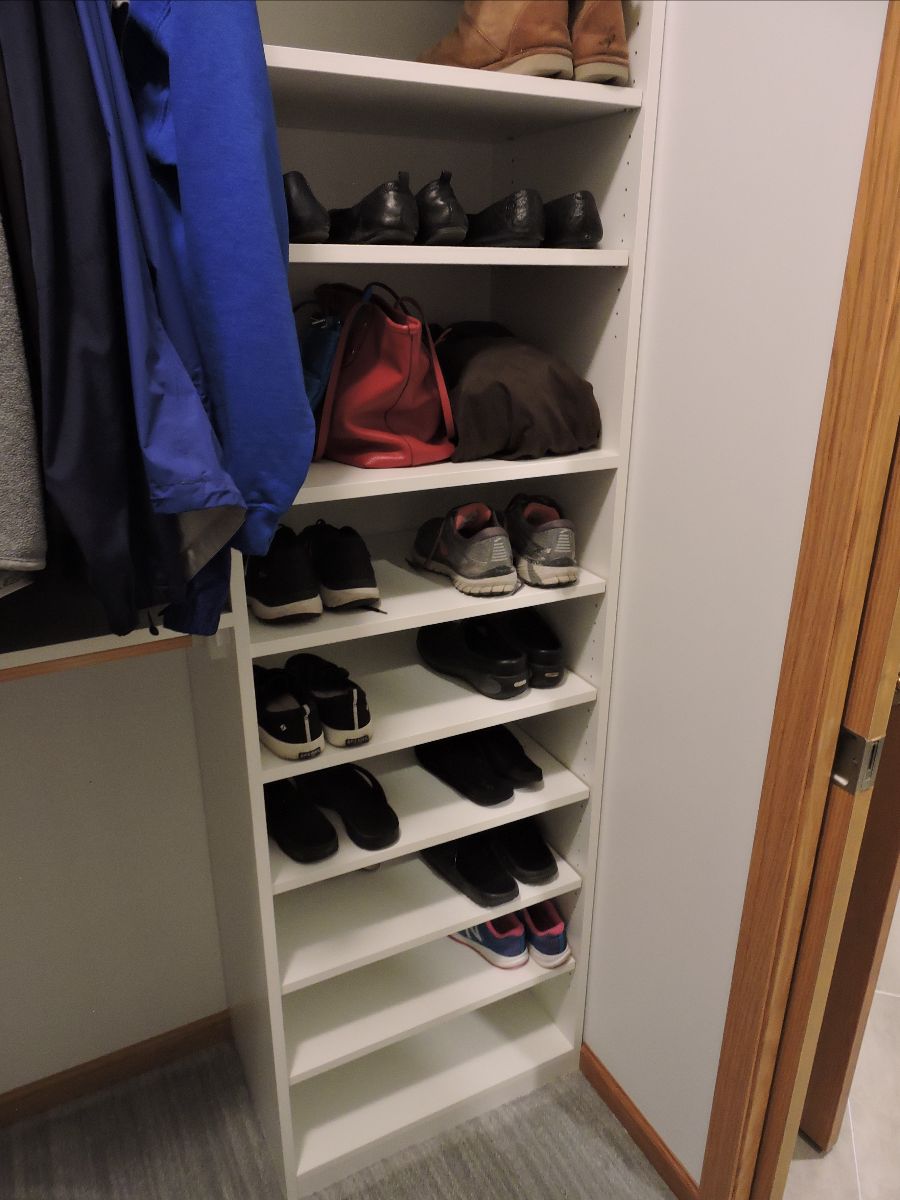 The closet received new white melamine fixtures, custom-made for the space. The new double vanity in the master was done in a blue that coordinates with a large format tile installed at the end of the shower. The quartz countertop surrounds under-mount sinks and new Delta single-hole faucets. The rest of the shower received 6×18 tile and new Delta fixtures. The floor throughout the bath and shower was finished with 8×40 tile laid at a 45-degree angle. 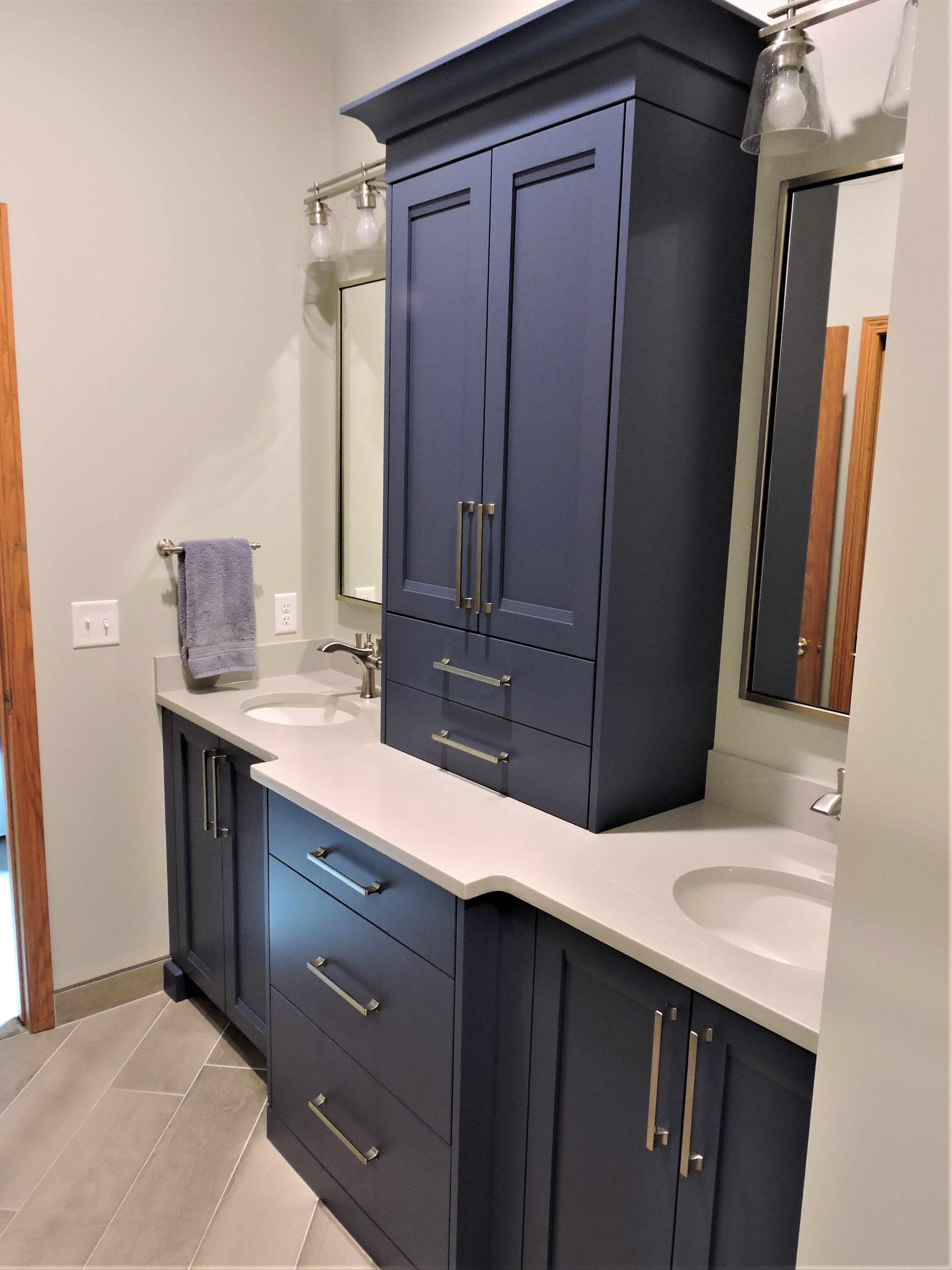 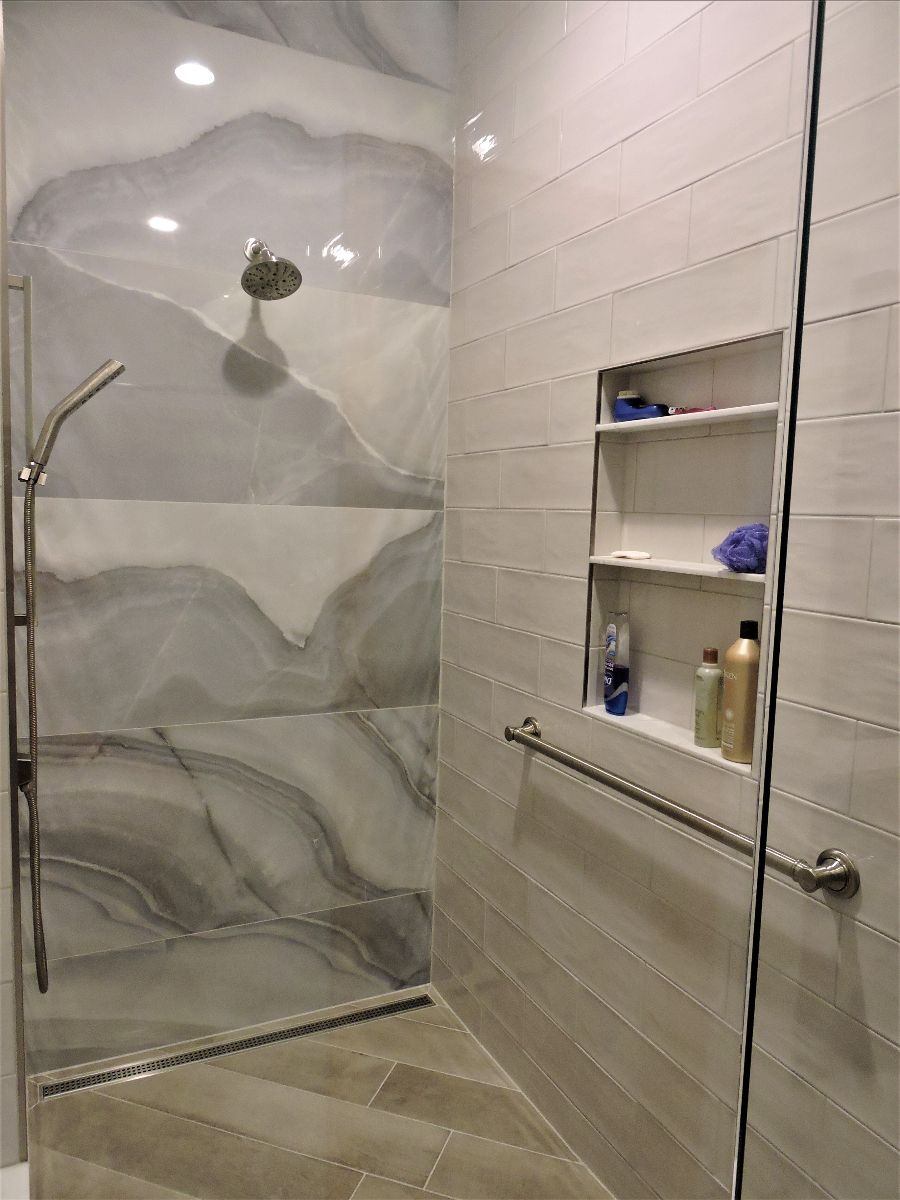 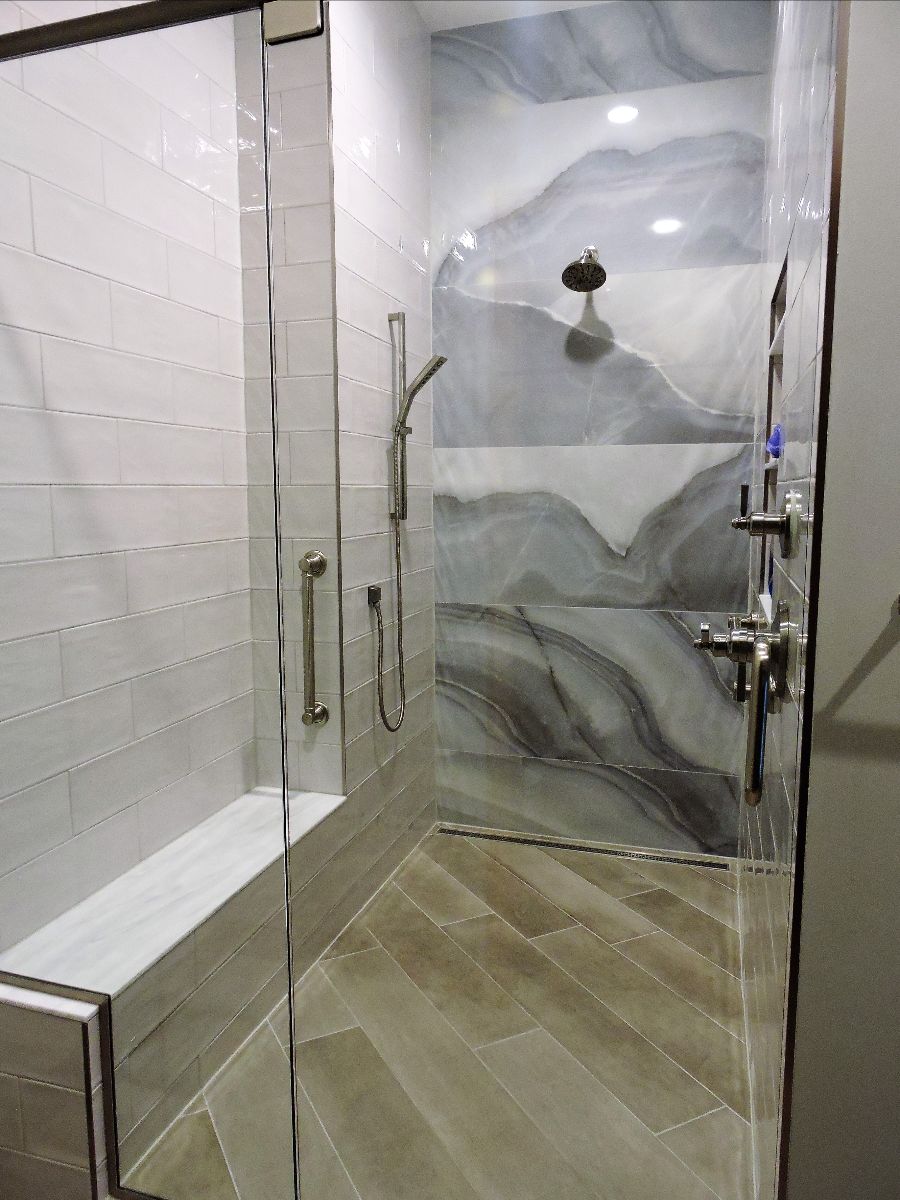 In the basement, the owner wanted a finished family room with a kitchenette/wet bar, a new bathroom, and a new fireplace and windows. Walls were framed in to define the space, then plumbing was installed for the bathroom and wet bar. Then electrical was installed for new lights, outlets, and the new fireplace. 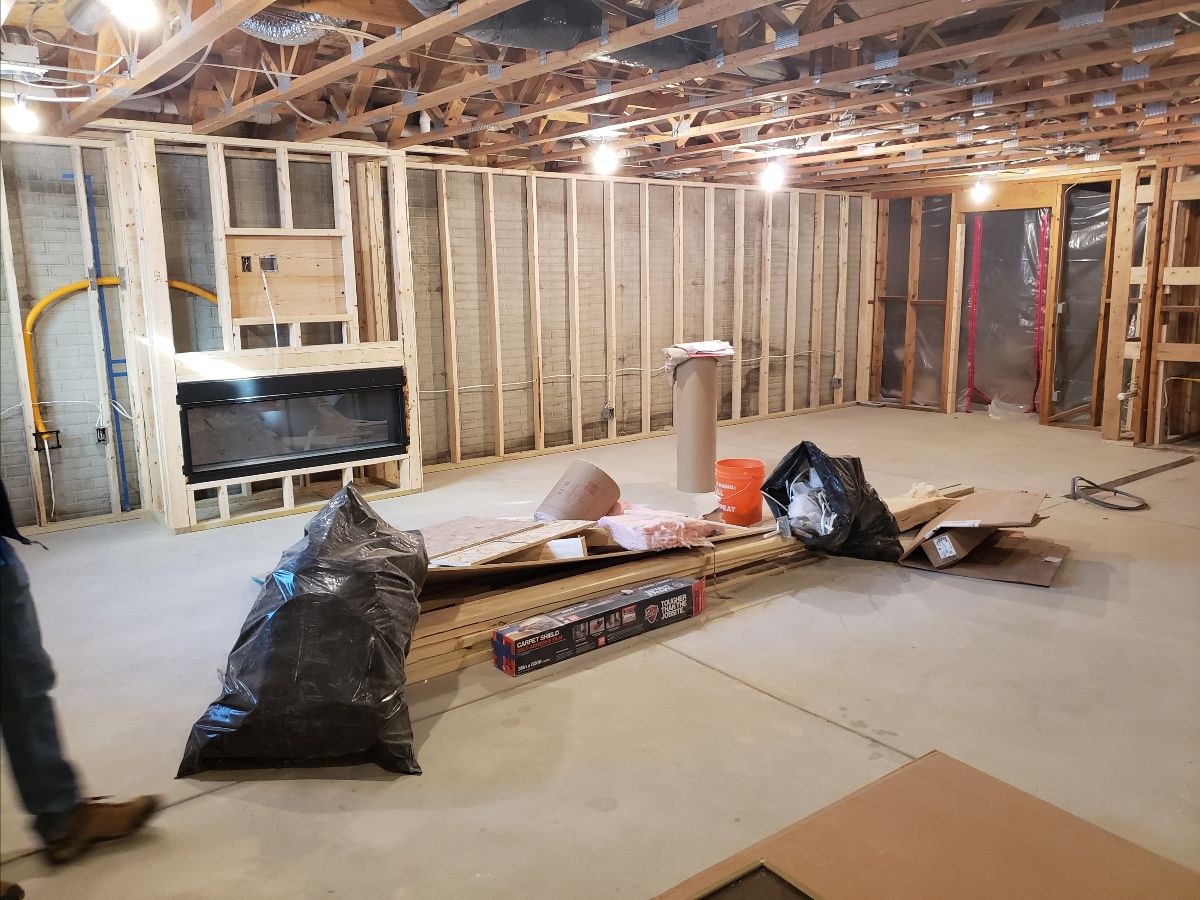 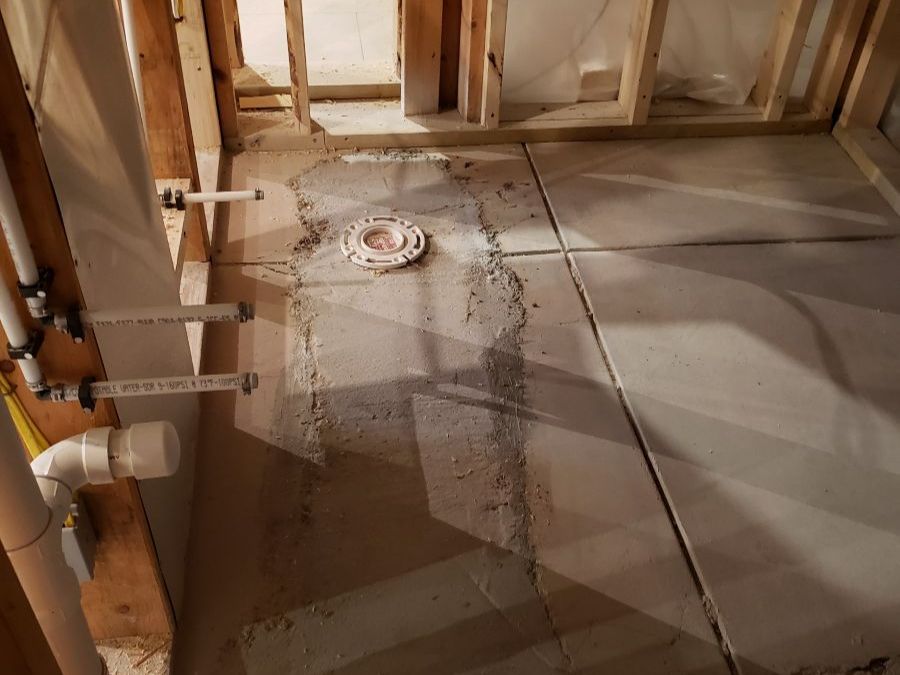 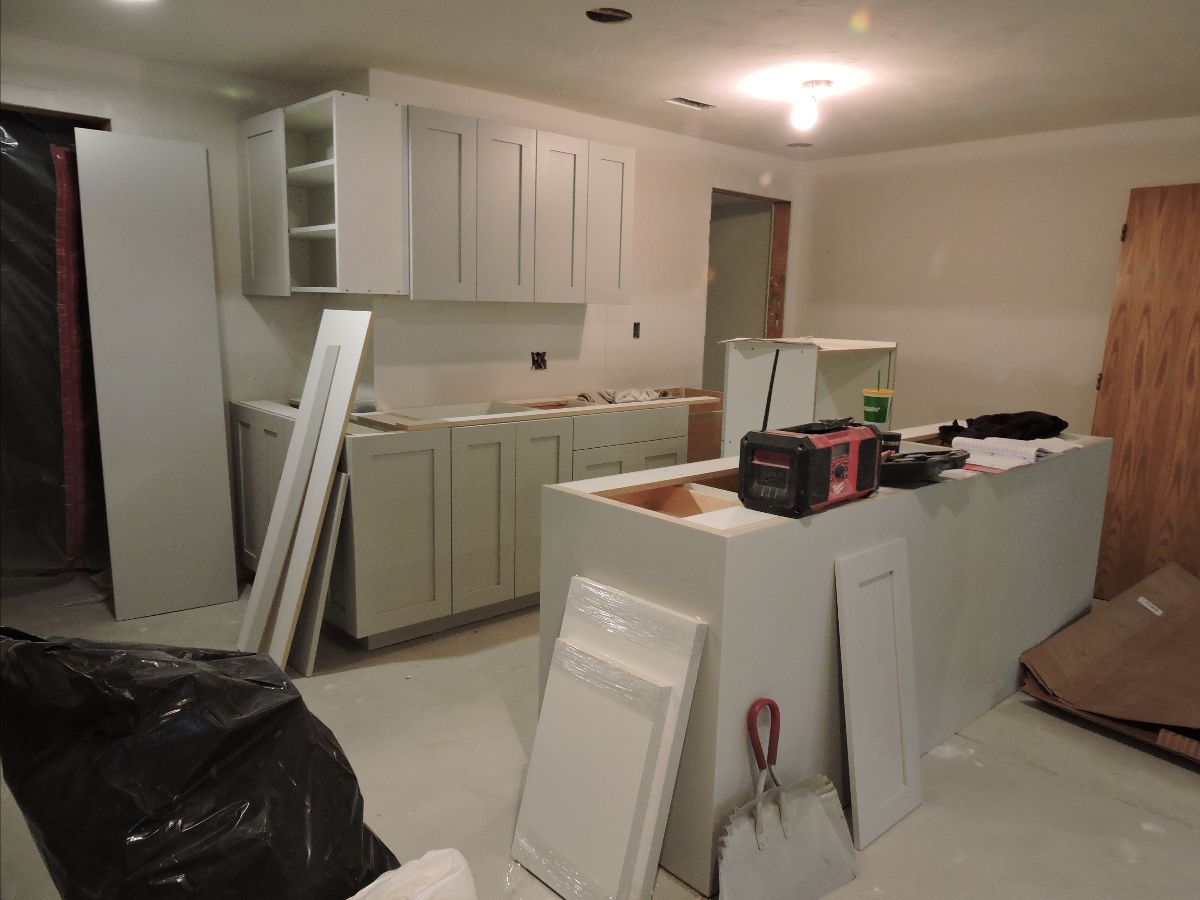 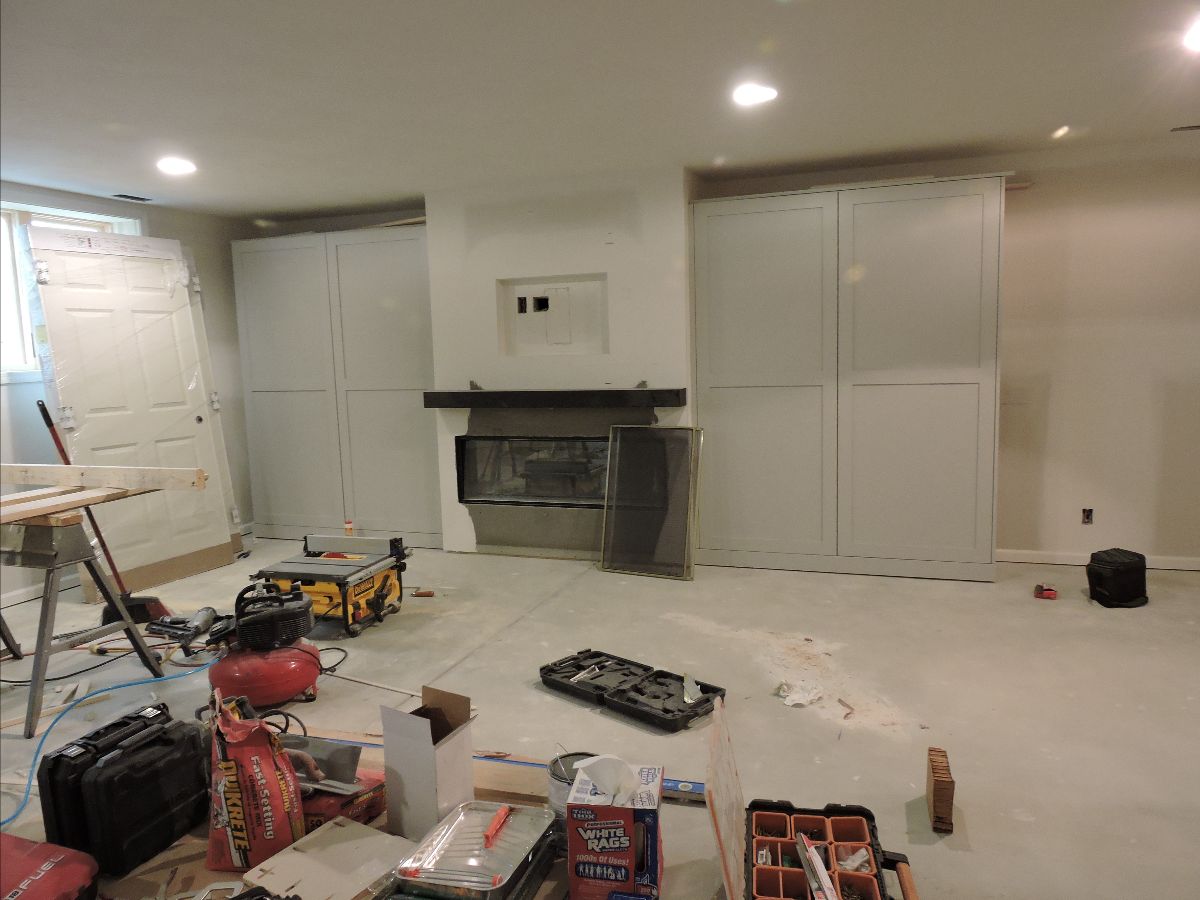 Once all the prep work was complete, the new cabinetry and fixtures came in. Besides the storage at the wet bar, two large cabinets were installed flanking the fireplace for additional storage. 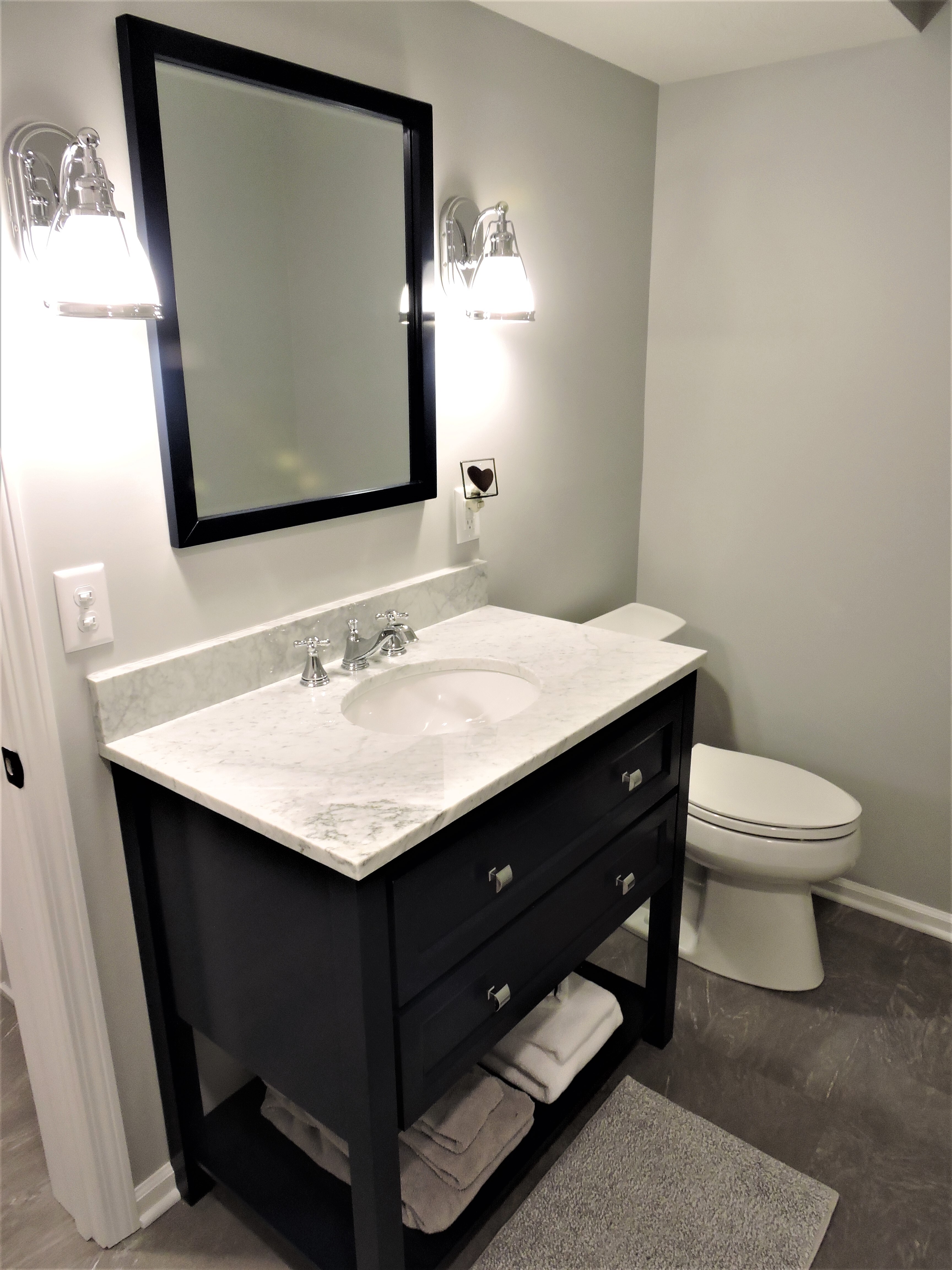 The bathroom in the basement received a Jeffery Alexander vanity with a Carrera marble top and coordinating mirror. The cabinetry for the wet bar and storage cabinets were custom-made and finished in light gray. The quartz countertops for the island are Calacatta Venice, which coordinates with the Marlow Mist 3×12 backsplash tile. The Raven grout joints coordinate with the Anthracite sink and matte black faucet and black cabinet hardware. 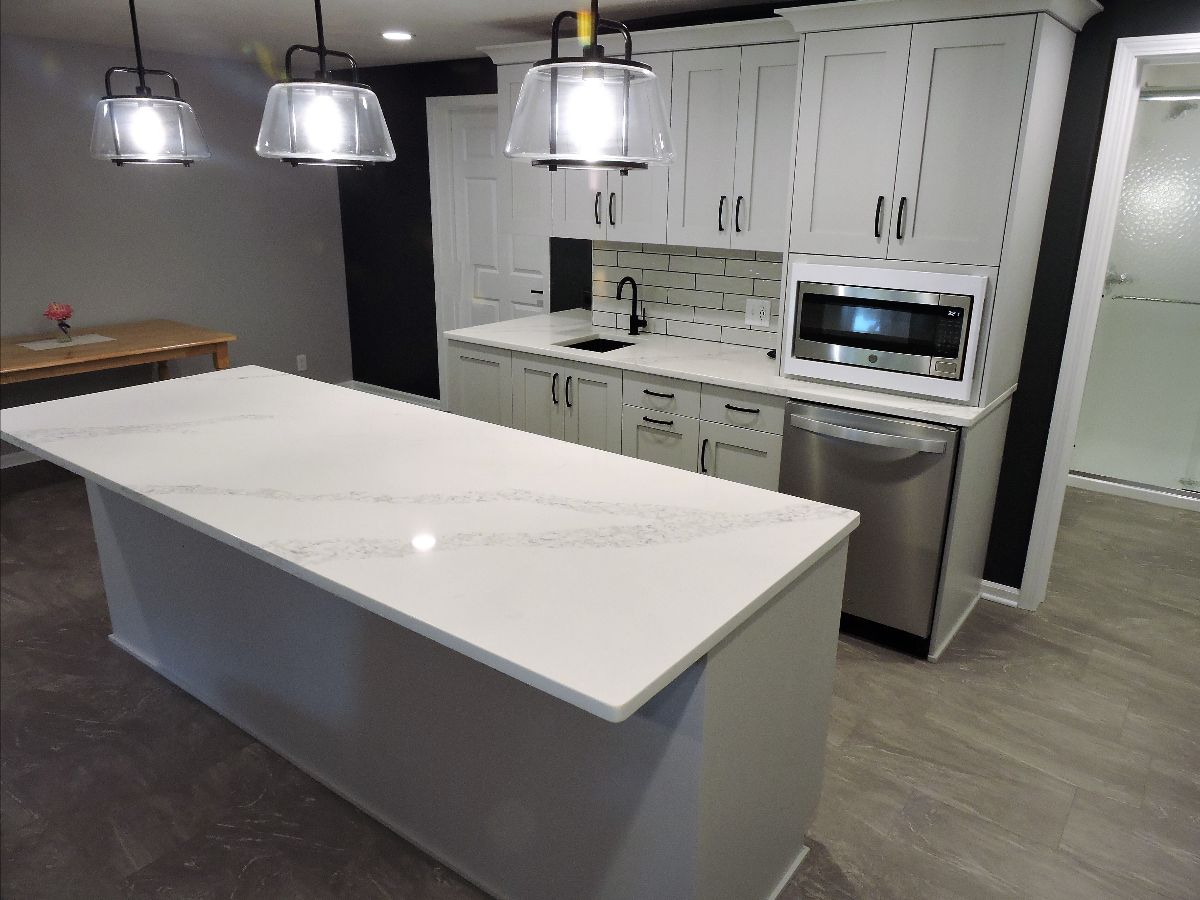 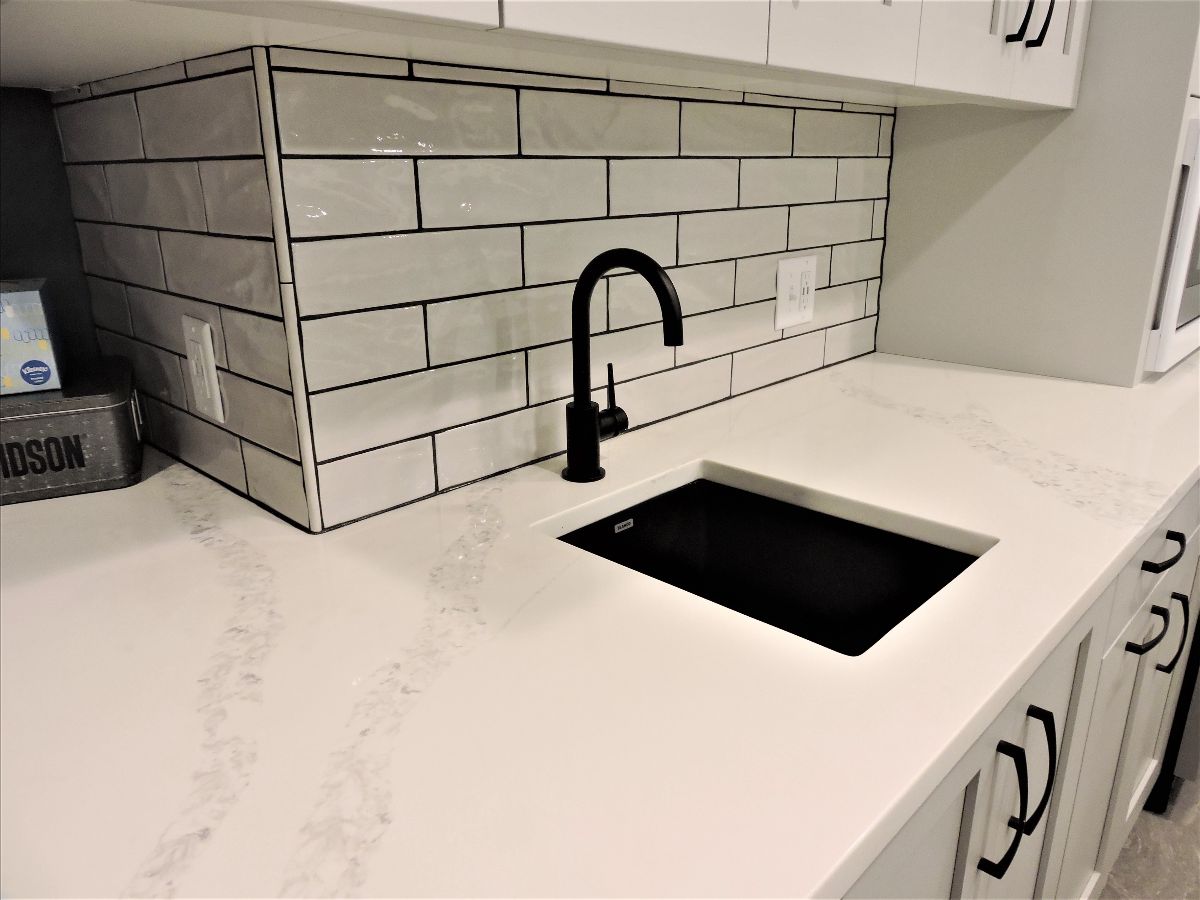 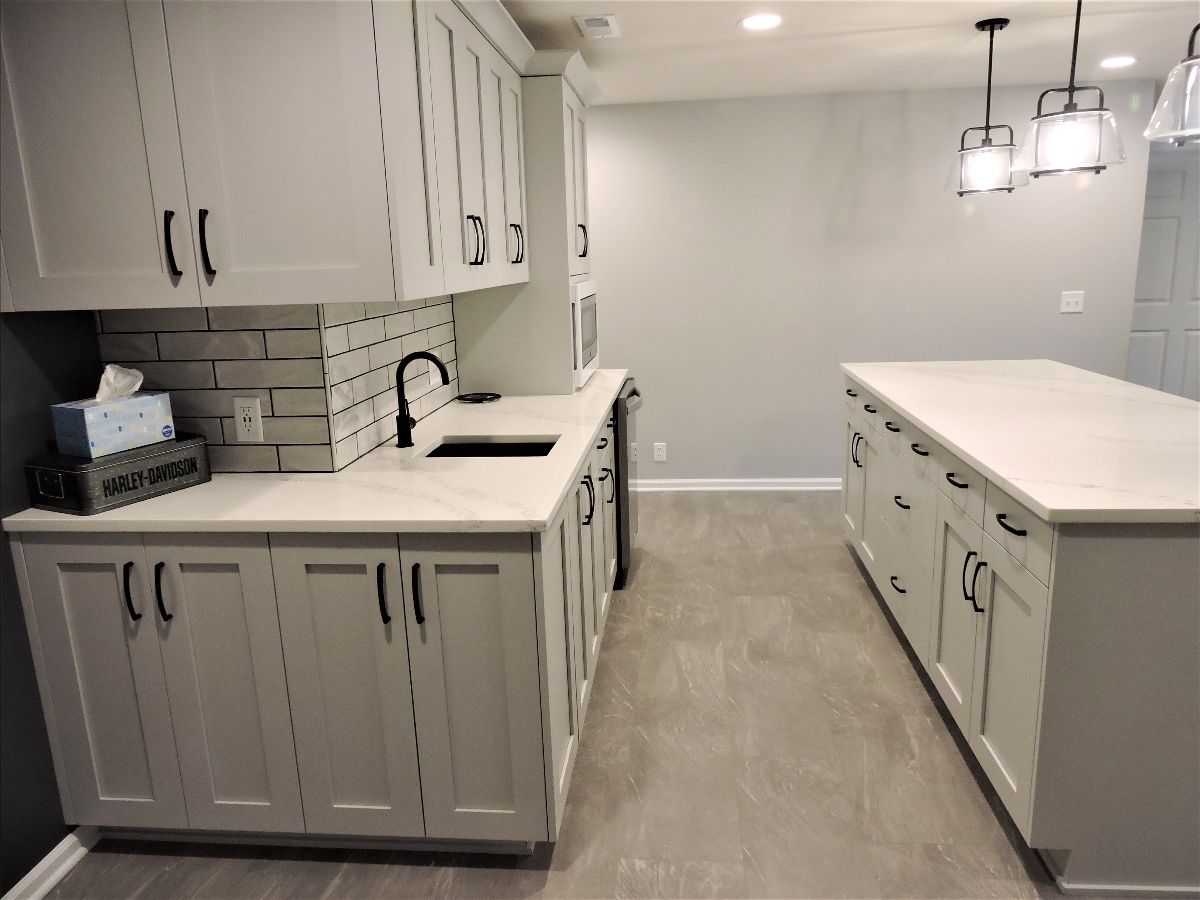 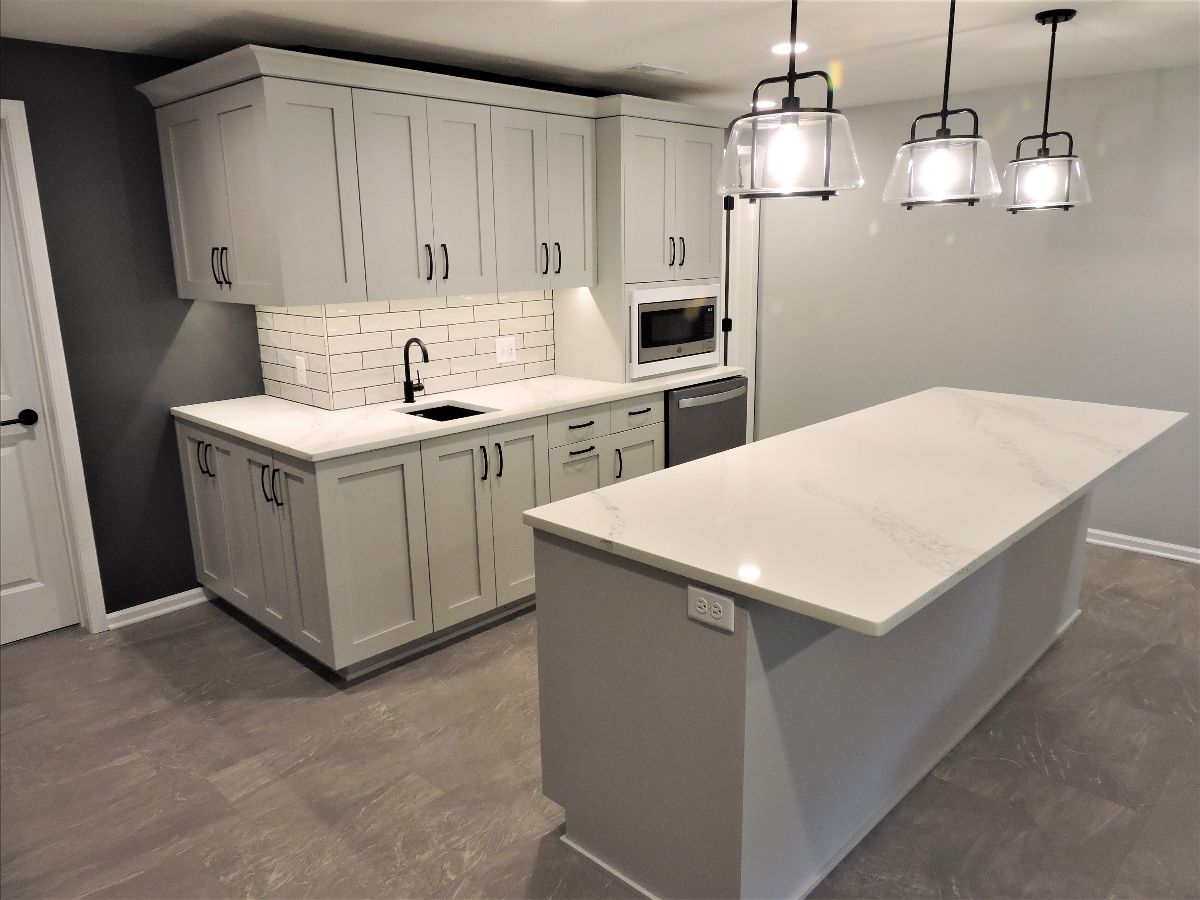 The fireplace was surrounded by glacial black stone and sits beneath an Alder mantel. The windows are Anderson casements. 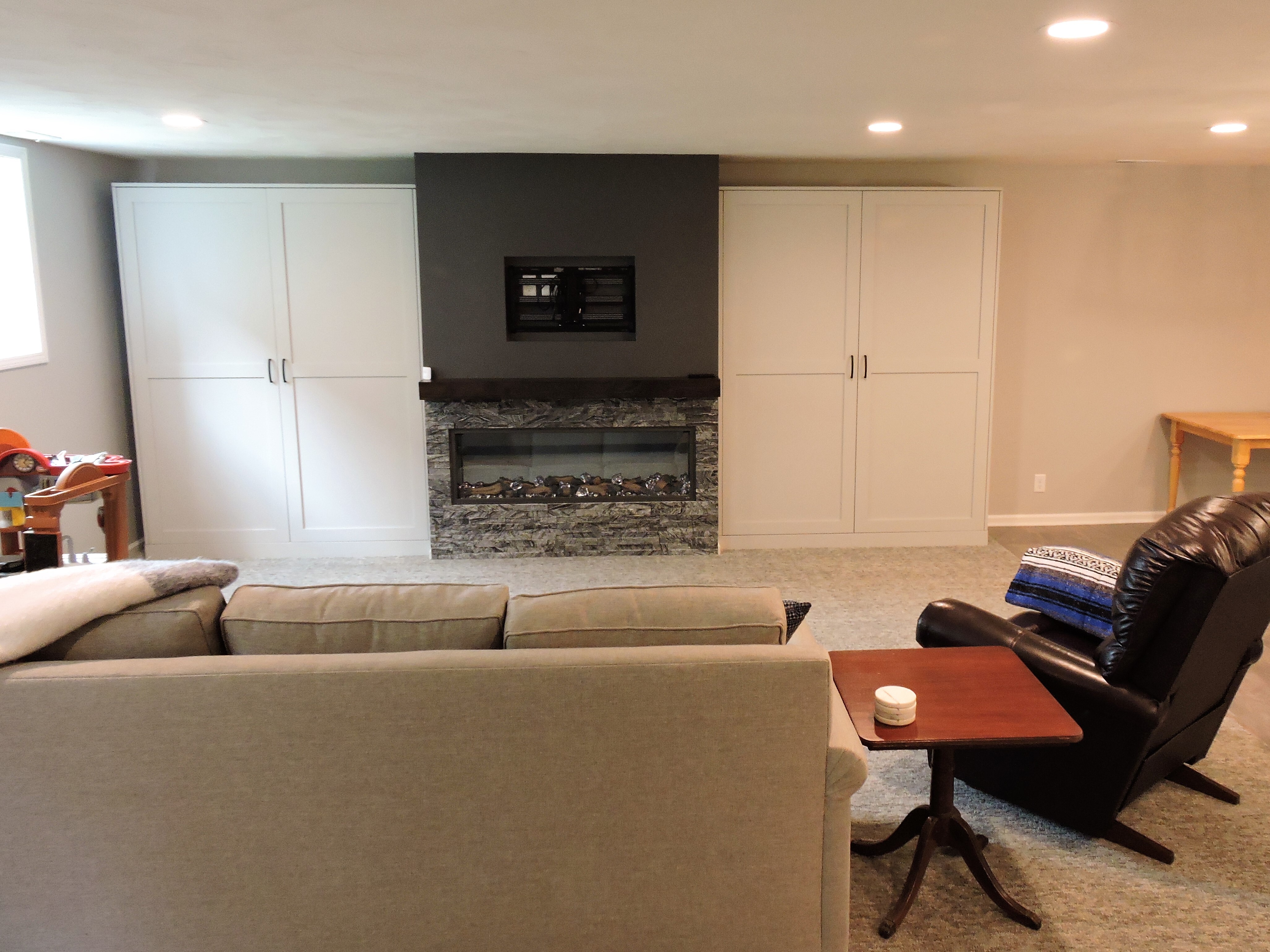 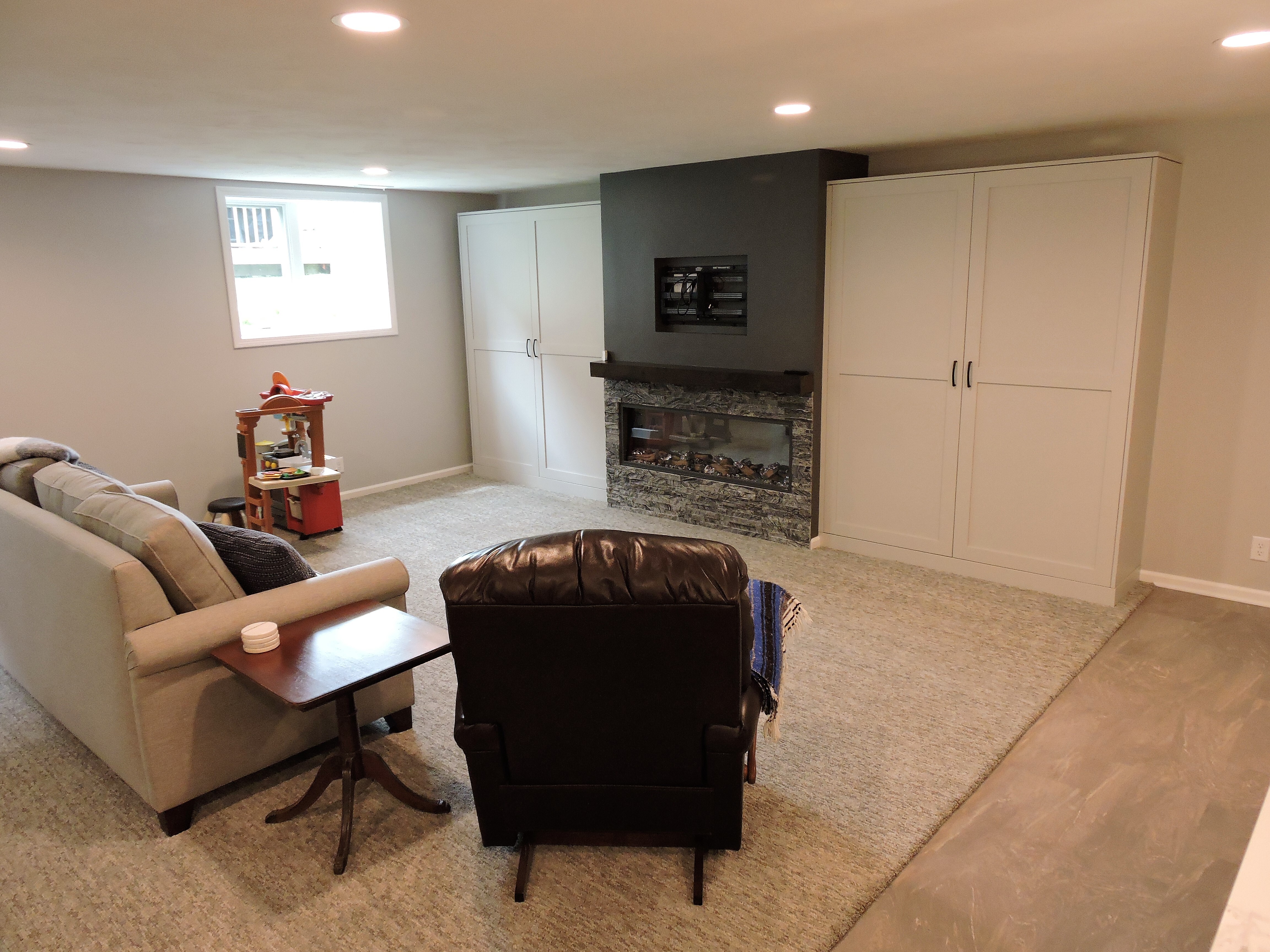 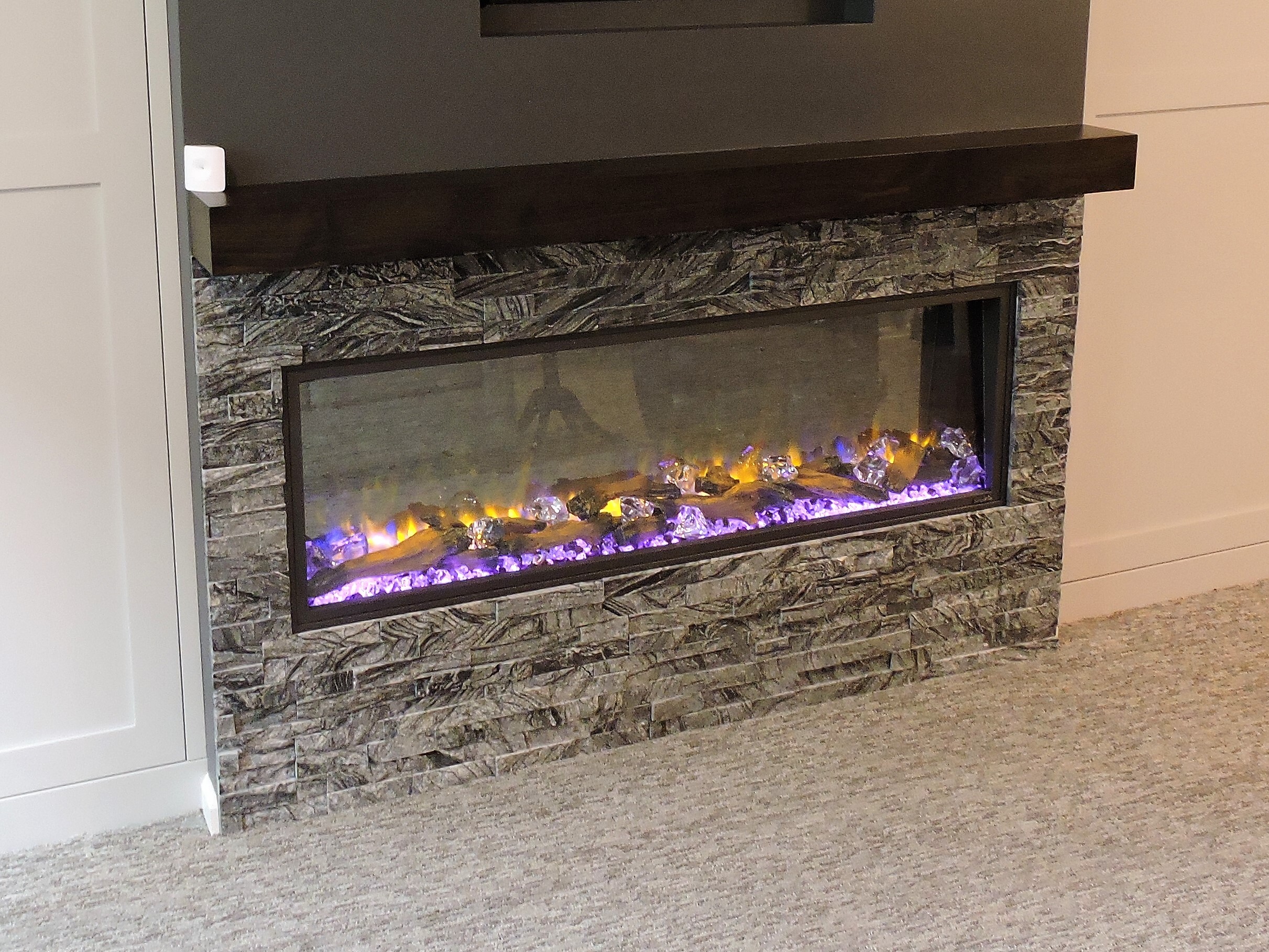 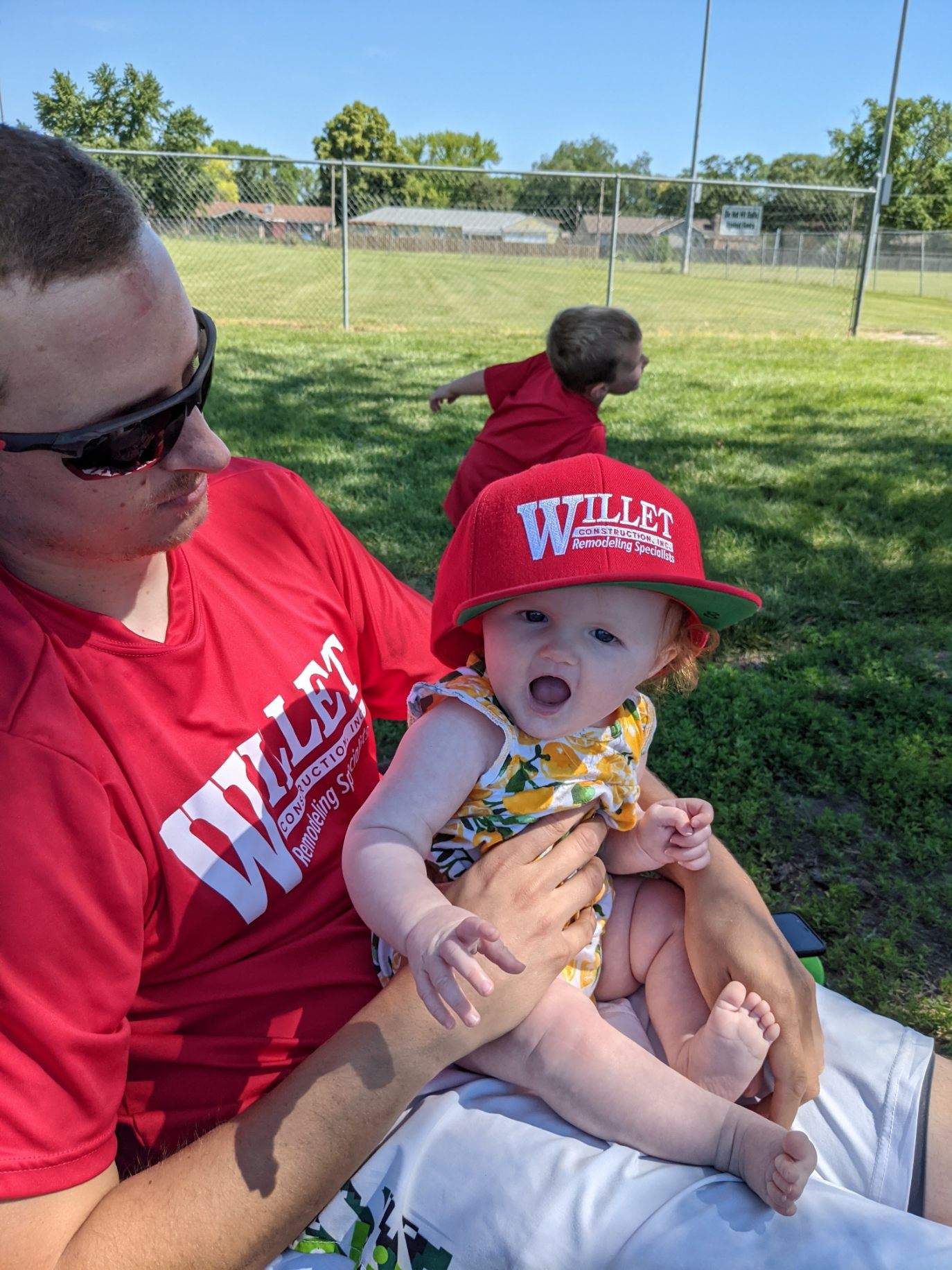 Congratulations to the Willet Construction-sponsored slow-pitch baseball team. They won the Class E State Tournament, so next year look for them in Class D! 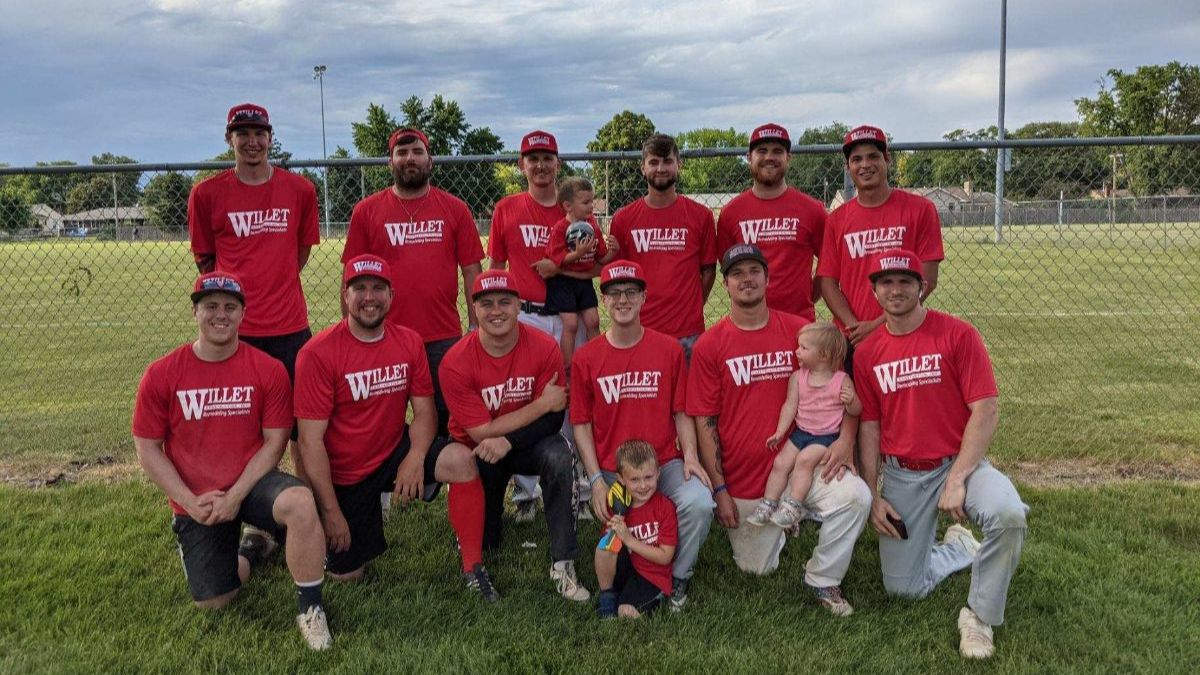 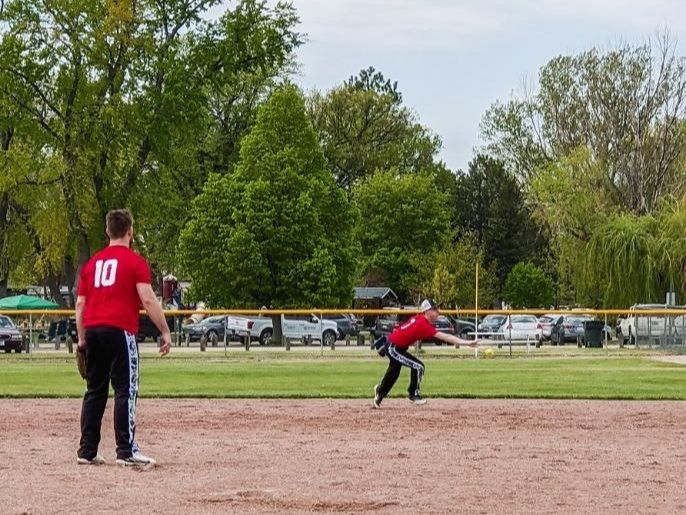 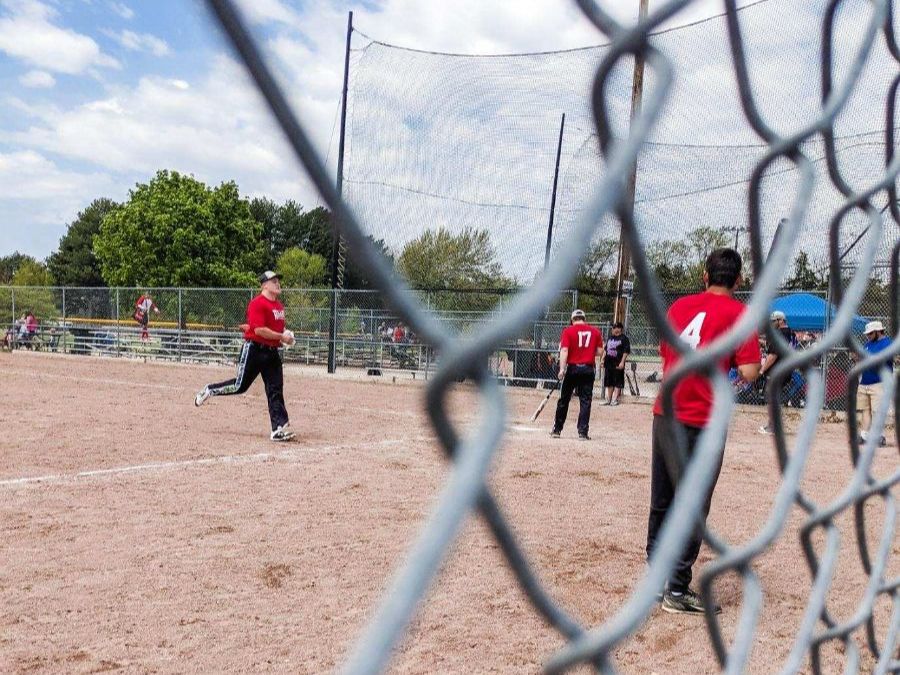 WHAT WOULD JENNY DO? 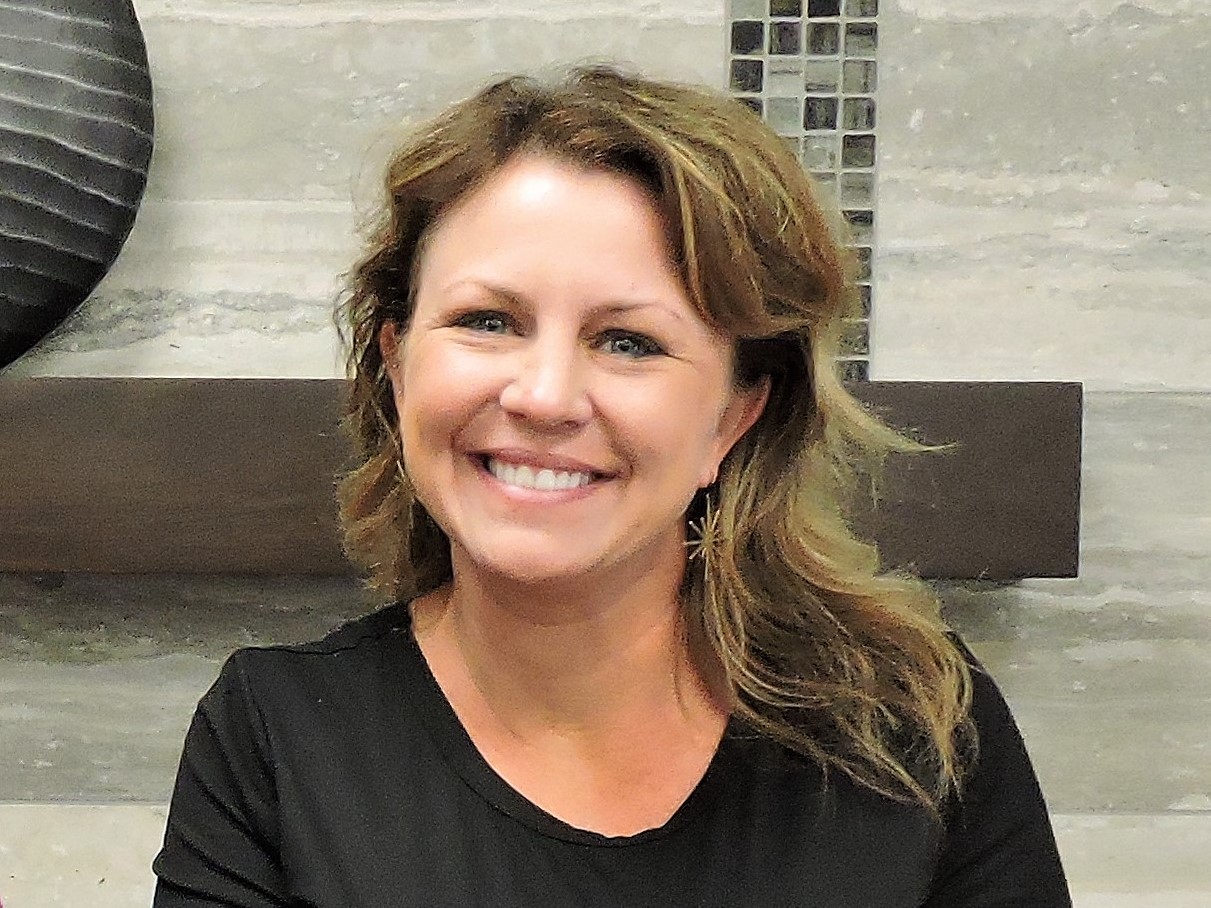 What are some things people don’t consider when thinking about remodeling? Think about updating moldings and trim, changing can lights to LED, changing outlet, and switch plate colors. 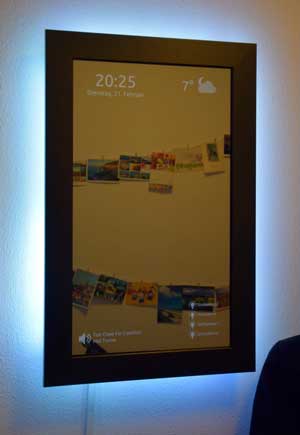 In a recent survey by the International Furnishings & Design Association, smart glass on mirrors surpassed water-saving features as the most desired items in a bathroom. Smart glass can mean mirrors with built-in TV or computer capability, so you can keep up to date with the weather or news as you’re getting ready.

For the first time in a year, lumber prices dropped in July. The drop was just a fraction of the increase seen the month prior, but it was a drop. Lumber prices won’t go down significantly in the short term, partly because suppliers have purchased stock at the higher prices, so they won’t want to sell their inventory at a loss. We are optimistic the lower price trend will continue, but we don’t think they will go back to “normal” any time soon. It’s been a year since the skyrocketing prices began climbing, so their decline could take just as long. 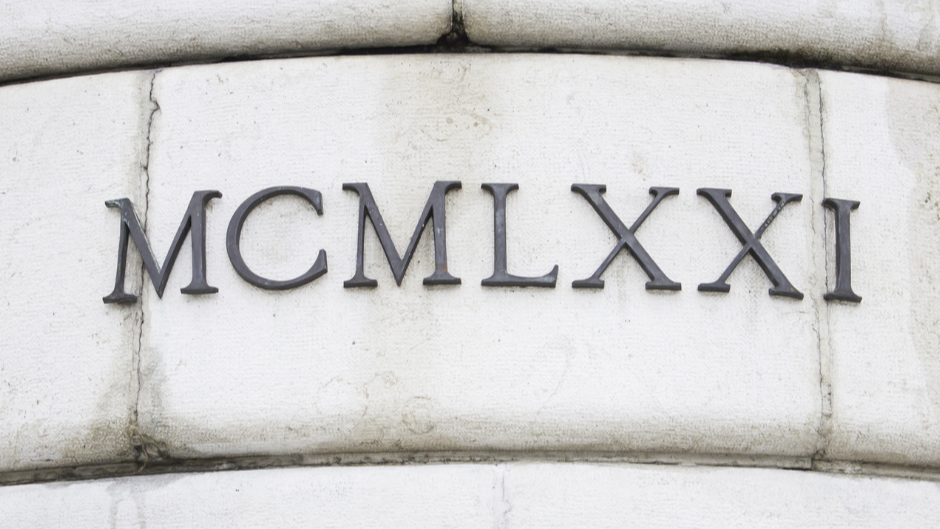 Did you know Roman numerals aren’t really Roman? Rome was founded somewhere between 850 and 750 BC, in a region inhabited by a wide range of civilizations. But most likely, the numbering system came from the Etruscans, from which much of Roman civilization was based. The Etruscan numbering symbols date back as far as 900 BC, with their numerals being I, Λ, X, and ↑ for 1, 5, 10, and 50, respectively. To think, we’re using numbers today that are roughly 3,000 years old!

View full Newsletter HERE. Want to be the first to receive our monthly newsletters? Sign up HERE!